Best out of three.

The Rock Paper scissors emote is a unique emote that has been put in place to help make key decisions among teammates rather than the opponents. Rock Paper Scissors emote is symbolized by three different hand gestures made by the game character, namely the “Rock” gesture, the “Paper” gesture, and the “Scissors” gesture. The user with the gesture that dominates the other two gestures wins.

Usually, the chart below determines the order of selection according to the dominant gesture when using the Rock Paper Scissors emote:

This emote can be brought up whenever you need to make key decisions, including deciding the player that will be responsible for looting the Legendary SCAR and other top functions in the Fortnite Battle Royale. However, during intense matches where you cannot afford to waste any time, you can just initiate the emote just one time instead of three, and decide once and for all. Repeat the same process within the same time frame, and the game will select a form for each player at random.

Rock Paper Scissors emote can be gotten from the Cash Shop for 200 V-Bucks only. It is available in a wide array of skins that allowed users to uniquely perform an equipped emote in different outfits. 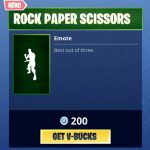 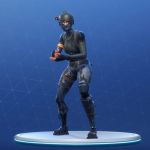 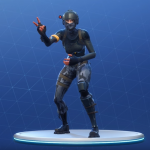 Rock Paper Scissors high-quality PNG images with transparent background to use them as you wish (YouTube thumbnails, skin concept and so on). 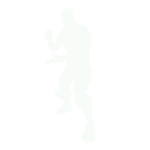 Rock Paper Scissors rotation history in the Fortnite Shop. Below you can see the first and last time when Rock Paper Scissors could be bought from Item Shop, also how many days it was seen and the dates list. This cosmetic item can be re-added in the future, so check the store regularly.

Unwrapped is a Christmas-themed emote animation available to the Battle Royale version of the third-person shooting game called Fortnite. Emotes play a set of...

The Scorecard is the name of one of the uncommon emote animations available to the third-person multiplayer shooting video game called Fortnite Battle Royale....

Finger Guns is one of the astonishing emotes that is included with the Fortnite: Battle Royale video game. Finger Guns dancing style is depicted...

did you know, this was sold at some stage for 500 v-bucks but was still uncommen