The T-Pose is among the uncommon emote animations for the game Fortnite Battle Royale. This pose was released along with the scarecrow-themed set called Straw Stuffed but is not a part of the said set.

The T-Pose is an animation where the player’s avatar will hold both his arms straight, his chin up, back straight, and his feet together – creating a steady letter “T”. This pose was meant to be used with the scarecrow outfit called Hay Man.

Although it is clear that the pose was created for the Hay Man and Straw Ops outfits, this uncommon emote animation is not a part of any set. 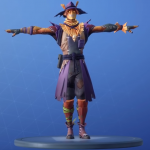 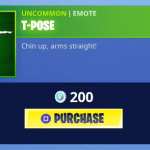 T-Pose high-quality PNG images with transparent background to use them as you wish (YouTube thumbnails, skin concept and so on).

T-Pose rotation history in the Fortnite Shop. Below you can see the first and last time when T-Pose could be bought from Item Shop, also how many days it was seen and the dates list. This cosmetic item can be re-added in the future, so check the store regularly.

The Scorecard is the name of one of the uncommon emote animations available to the third-person multiplayer shooting video game called Fortnite Battle Royale....

The Go! Go! Go! is the name of one of the uncommon emote animations for the game Fortnite Battle Royale. Emotes are animations that...

The Hotstuff is the name of one of the uncommon emote animations for the game Fortnite Battle Royale. Emotes are animations that showcase dance...

I love Fortnite so so so much

Can I Buy this

It was NOT created for the hay man. The Tpose is a meme and it’s ruined because of Fortnite.

When will it come back out!