The Bear Force One is a glider of epic rarity and is part of the Royale Hearts set. It is designed as a teddy bear seated on a pair of wings with a heart in its hands. When deployed the glider has an “awwwwwww” sound effect.

This epic glider is a part of the Royale Hearts set.

You can find the Bear Force One glider rotating in the Item Shop priced at 1500 V-Bucks (about $15). Keep your eyes open or you might miss it. Bear Force One high-quality PNG images with transparent background to use them as you wish (YouTube thumbnails, skin concept and so on). 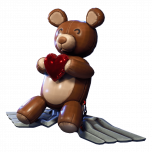 Bear Force One rotation history in the Fortnite Shop. Below you can see the first and last time when Bear Force One could be bought from Item Shop, also how many days it was seen and the dates list. This cosmetic item can be re-added in the future, so check the store regularly.

The Cyclone is the name of one of the epic glider skins for the game Fortnite Battle Royale. Glider skins will change the appearance...