Carbon was a reward in Battle Pass Season 3 at Tier 39.

“Precision built carbon fiber”. The Carbon glider is carefully designed to get the job done.

The Carbon glider is one of the uncommon Fortnite gliders. Being part of the Black Vector Set, it is the primary glider of the Elite Agent. Being carbon-based it is black colored with eye-catching cyan-coloured lights. Get hold of the Tactical Spade and the Precision back bling to complete the set.

This glider skin is a part of the Black Vector Set.

There is 6 cosmetics item in the Black Vector set, check the list below to see which items are included.

The Catalyst is the name of one of the back bling cosmetic items for the game Fortnite Battle Royale....

Precision is the name of one of the cosmetic Back Blings of the game Fortnite: Battle Royale. Back Blings...

Tactical Spade is the name of one of uncommon harvesting tool skins for the game Fortnite Battle Royale. The...

The Rogue Agent Elite Agent is one of the Epic outfits for the Black Vector Set for the game...

To unlock the Carbon glider, you need to purchase the Season 3 Battle Pass and reach Tier 39 within the same season. Doing so, you will receive the glider as a reward. Carbon high-quality PNG images with transparent background to use them as you wish (YouTube thumbnails, skin concept and so on). 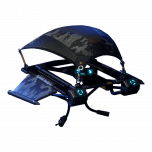 Where the ocean meets the sky.

Harness the all consuming flame.

I ask for 3 things only please