The Frostwing is the name of one of the legendary glider skins for the game Fortnite Battle Royale. Although it is labeled as a “skin”, the Frostwing replaces the default glider model and replaces the player’s glider with a flying creature.

The Frostwing features a legendary blue and white flying beast that carries the player around like a glider during the drop phase. It is said, that the beast has awoken from an ageless slumber and features a skeletal bird-like appearance with a bluish skin and horns. The creature also features some harness that is used on the player when equipped. Although it looks entirely different, the Frostwing functions just the same as the default glider.

This legendary glider skin is part of the Harbinger Set.

There is 5 cosmetics item in the Harbinger set, check the list below to see which items are included.

The Permafrost is the name of one of the epic pickaxe skins for the game Fortnite Battle Royale. Pickaxe...

The Valkyrie Wing is the name of one of the legendary back bling cosmetic items for the game Fortnite...

The Valkyrie is a legendary female skin for the game Fortnite: Battle Royale. This skin changes the appearance of...

The Frostwing is the name of one of the legendary glider skins for the game Fortnite Battle Royale. Although... Frostwing high-quality PNG images with transparent background to use them as you wish (YouTube thumbnails, skin concept and so on). 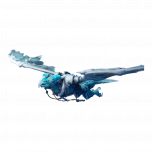 Frostwing rotation history in the Fortnite Shop. Below you can see the first and last time when Frostwing could be bought from Item Shop, also how many days it was seen and the dates list. This cosmetic item can be re-added in the future, so check the store regularly.

Soaring from the underworld.

The Laser Chomp is the name of one of the few legendary glider skins for the game Fortnite Battle Royale. Glider skins will change...

The best glider ever

It is so dope

amazing …its coming back in season 6 !

This glider is WAY TOO F*KIN LOUD