Straight from the scrapyard into the air. One man’s trash is another man’s come up.

Although it might sound like trash the epic Rusty Rider is anything but. Black with red fiery details, spikes on top and pipes in the back, this is the most punk rock stylish glider you will currently find in this game. Surely, no one would want to crash into your glider this time.

Rusty Rider is part of the Storm Scavenger set.

This glider skin item can be purchased in the Item Shop during its rotation. Rusty Rider high-quality PNG images with transparent background to use them as you wish (YouTube thumbnails, skin concept and so on). 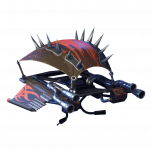 Rusty Rider rotation history in the Fortnite Shop. Below you can see the first and last time when Rusty Rider could be bought from Item Shop, also how many days it was seen and the dates list. This cosmetic item can be re-added in the future, so check the store regularly.

A ship of speed and ferocity.

Dazzle all the way down.

Field Wraith is the name of one of the epic glider skins for the Battle Royale mode of the game Fortnite. As a skin,...

Why soar when you can flutter.

It’s in the item shop today only. Buy it now or it’s gone.