The Windbreaker is the name of one of the uncommon glider skins for the game Fortnite Battle Royale. Glider skins will change the appearance of the player’s default glider but will not change or alter its performance, speed, acceleration, or efficiency. Skins are mainly for aesthetic purposes only.

The Windbreaker is a colorful glider skin that adds a pallet of color in shades of blue, purple, and violet. This glider also features two barbell sets on each side of the glider. The added weights do not provide extra acceleration nor make the glider move any faster.

The uncommon glider skin is part of the Spandex Squad Set which is themed after retro-styled aerobics and exercises.

There is 6 cosmetics item in the Spandex Squad set, check the list below to see which items are included.

The Windbreaker is the name of one of the uncommon glider skins for the game Fortnite Battle Royale. Glider...

The Axercise is the name of one of the uncommon pickaxe skins for the game Fortnite Battle Royale. Pickaxe...

The BoomBox is the name of one of the epic back bling cosmetic items for the game Fortnite Battle...

The Mullet Marauder is the name of one of the epic male skin outfits for the game Fortnite Battle... 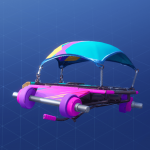 Windbreaker high-quality PNG images with transparent background to use them as you wish (YouTube thumbnails, skin concept and so on). 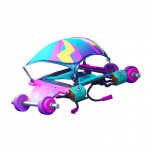 Windbreaker rotation history in the Fortnite Shop. Below you can see the first and last time when Windbreaker could be bought from Item Shop, also how many days it was seen and the dates list. This cosmetic item can be re-added in the future, so check the store regularly.

Raptor is a Fortnite skin in the Battle Royale mode modifying the glider. The Raptor glider is an uncommon skin that colors your glider...

Mako is a Fortnite: Battle Royale glider that makes the enemies fear for their lives. The Mako glider is uncommon and lets you “soar...