Getting the right weapon in Fortnite Battle Royale is crucial to success. Different weapons exist for distinct situations. From shotguns to SMGs to rocket launchers, there are numerous weapons you can find in the game. Epic Game – the creator of Fortnite, continues to roll out new weapons for users, and this further makes the game interesting and intriguing.

A good understanding of the basics of weapons in Fortnite is essential. Also, it is important to note that all weapons in the game come in one of five different rarities. They are listed below in increasing order of rarity;

Getting a weapon of higher rarity can help you keep high-quality weapons that inflict damage to opponents in your inventory. If a weapon has a higher rarity class, it will inflict more damage than the same weapon with a lower rarity. Other potentials and benefits attached to increasing weapon rarity include more fatal impact upon hit and faster reload time. If you are carrying a weapon during gameplay, it will do you much good to upgrade to a higher rarity version if found after eliminating an opponent. The only exception to this is when the new weapon has no bullets, or you’re void of extra ammo yourself. To pick a higher rarity weapon, you need to drop the lower version with you. To do this, go into your inventory menu, you’ll be presented with your current weapons, ammo, and resources. This menu also allows you to choose weapons you wish to drop. After dropping the weapon you wish to discard, you can then proceed to pick up the higher rarity weapon available to you.

Also, it is important to know that, not all weapons in Fortnite are available in the five rarities. For example, the Tactical SMG only has 3 rarity types. As you get more used to the game, you will begin to identify each weapon’s rarity class.

Here’s a brief description of the most effective weapons to achieving victory in Fortnite Battle Royale;

Bolt Action Sniper Rifle: This weapon easily qualifies as the best long-range weapon in Fortnite. It adequately delivers exhilarating headshots and can prove very fatal to opponents. If you can successfully master its bullet drop, then you have a good chance of killing off enemies at once. When using this weapon, you need to make every shot count as this helps you conserve its rather limited ammo.

Tactical SMG: This weapon is very essential. Try as much as possible to lay your hands on it in every match. It is arguably the best close range weapon available in Fortnite, and it is capable of shredding enemies into pieces. Make each shot fired count as this weapon is in its own league of dosing out fatal hits. 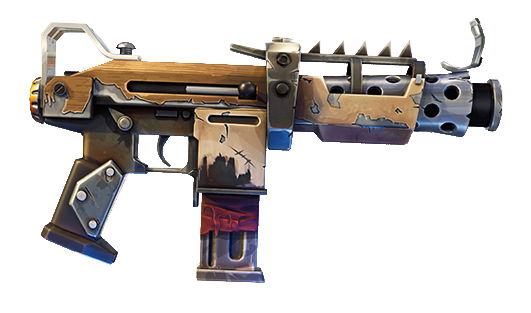 Pump Shotgun: Another close-range masterpiece. This weapon can kill off enemies in one or two accurate shots. It is good you get this weapon early in the game when opponents haven’t armored up. If they have, it might be a lot harder to take them out in one or two shots.

Rocket Launcher: Very vital to destroying structures of opponents and the opponents themselves. This weapon fires shots that travel in a straight line across the battle field hitting the enemy unawares. They inflict tremendous damage and could be valuable to crowning you the last man standing in the game.

Fortnite Battle Royale Weapon’s Rarity – Meaning and Importance high-quality PNG images with transparent background to use them as you wish (YouTube thumbnails, skin concept and so on).

Tactical smg has been vaulted