The Aerial Assault Troop is the name of one of the male Battle Pass outfits for the game Fortnite: BR.

The Aerial Assault Trooper is a rare Battle Pass outfit that features a dark green camouflaged military suit and a black paratrooper helmet with orange decals. The outfit also comes with a light brown scarf.

The Aerial Assault Trooper outfit is not a part of any set.

This outfit can be purchased from the Season 1 Shop and requires Season Level 15. Although the outfit can be unlocked once the player reaches level 15 in the current season, it won’t be available until it is bought using V-Bucks. Aerial Assault Troop high-quality PNG images with transparent background to use them as you wish (YouTube thumbnails, skin concept and so on). 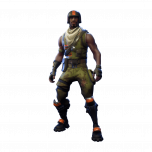 The Midnight Ops is one of the male-only outfits for the game Fortnite Battle Royale. This rare outfit is a part of the Stealth...

Every day’s a snow day.

Ready to make a break for it.

I love this skin

i got this skin!!

I’ll trade a galaxy for it ??!!!! I got scammed and really want it… could I have your acc and you take mine ? HMU my insta is vending machine memes

pis I need it

This is my favorite skin I got it it’s nice