The Arctic Assassin is one of the rare costumes for the game Fortnite Battle Royale. This costume is the female version of the Absolute Zero outfit and is a part of the same set.

Arctic Assassin is a female-only outfit that features a white body armor with black and gray details. The costume includes some gray gloves and boots, and a pair of black goggles. Unlike its male version called Absolute Zero, the Arctic Assassin does not contain a white scarf.

The Arctic Assassin outfit is a part of the Arctic Command Set that features four items including the male counterpart called Absolute Zero.

There is 4 cosmetics item in the Arctic Command set, check the list below to see which items are included.

The Ice Breaker is the name of one of the uncommon pickaxe skins for the game Fortnite Battle Royale....

The Arctic Assassin is one of the rare costumes for the game Fortnite Battle Royale. This costume is the...

The Absolute Zero is the name of one of the rare costumes for a male character for the game...

Snow Squall is a Fortnite glider skin preparing you for the Winter. The Snow Squall glider of uncommon rarity...

This costume can be purchased from the Cash Shop during the Winter Seasons or if it is in a rotation. Arctic Assassin high-quality PNG images with transparent background to use them as you wish (YouTube thumbnails, skin concept and so on). 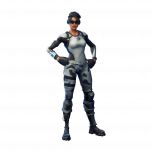 Arctic Assassin rotation history in the Fortnite Shop. Below you can see the first and last time when Arctic Assassin could be bought from Item Shop, also how many days it was seen and the dates list. This cosmetic item can be re-added in the future, so check the store regularly.

Cozy combat, fresh to your door.

Beware the silent sting of doom.

A dark star on the rise.

Does anyone know what backpacks go with this skin.

The swag bag from the ace pack

When would this item be on the store again? Is there any estimations to this?