The Bullseye is among the uncommon female avatar skins for the game Fortnite Battle Royale. Outfits change the appearance of the player, but do not have any added function or benefit except for aesthetical.

Bullseye features a female avatar wearing a marroon tanktop with an archery target decal in the center. The outfit also features the standard military pants and a cool military helm with goggles on her head.

This uncommon outfit is part of the Bullseye set.

There is 2 cosmetics item in the Bullseye set, check the list below to see which items are included.

Targeted is an uncommon glider. As suggested by its name, there is a target at the top of a...

The Bullseye is among the uncommon female avatar skins for the game Fortnite Battle Royale. Outfits change the appearance... 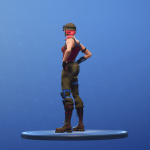 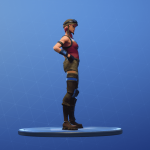 Bullseye high-quality PNG images with transparent background to use them as you wish (YouTube thumbnails, skin concept and so on). 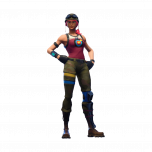 Bullseye rotation history in the Fortnite Shop. Below you can see the first and last time when Bullseye could be bought from Item Shop, also how many days it was seen and the dates list. This cosmetic item can be re-added in the future, so check the store regularly.

On the path to riches.

The Whistle Warrior is among the many uncommon outfits for the game Fortnite Battle Royale. This outfit is the female version of the Striped...

The Munitions Major skin features a major who is wearing a flag with a star on his neck, which gives a patriotic feeling to...