From ranch hand to righteous retribution.

Requires the player to reach Tier 1 in Season 6 Battle Pass.

The Calamity legendary outfit features a Western Bandit girl wearing a white V-neck tank top and mini shorts. When upgraded, the outfit features a black vest, a black western hat, and a black bandana mask. This outfit features unlockable styles. Each style unlocked adds some features to the outfit, including a leather jacket and some full gear equipment. When all styles are unlocked, the Calamity features a battle-ready black leather jacket with purple glowing outlines in a cool pattern, a bandolier of ammunition, and a black smoke aura that comes out of the avatar.

This legendary outfit is part of the Western Wilds Set.

This outfit can be unlocked at level 1 of the Season 6 Battle Pass. The unlockable styles can be obtained by gaining enough experience while using the skin. To obtain this outfit, you must first purchase the season 6 Battle Pass and reach the first tier. 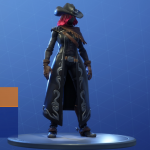 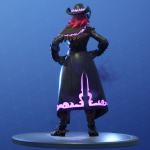 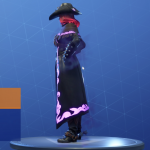 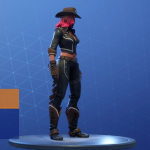 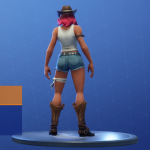 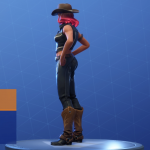 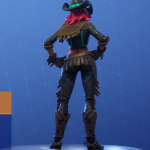 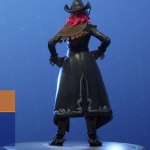 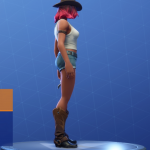 From ranch hand to righteous retribution.

Part of the Western Wilds set.

Calamity high-quality PNG images with transparent background to use them as you wish (YouTube thumbnails, skin concept and so on). 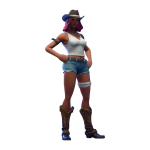 The Shogun is a cool male avatar skin with a legendary rarity rating available for the Battle Royale version of the game Fortnite. This...

The Redline is the name of the epic female skin outfit for the game Fortnite Battle Royale. Skins change the appearance of the player,...

The Rust Lord is the name of one of the Epic male Battle Pass outfits for season 3 of the game Fortnite: BR and...