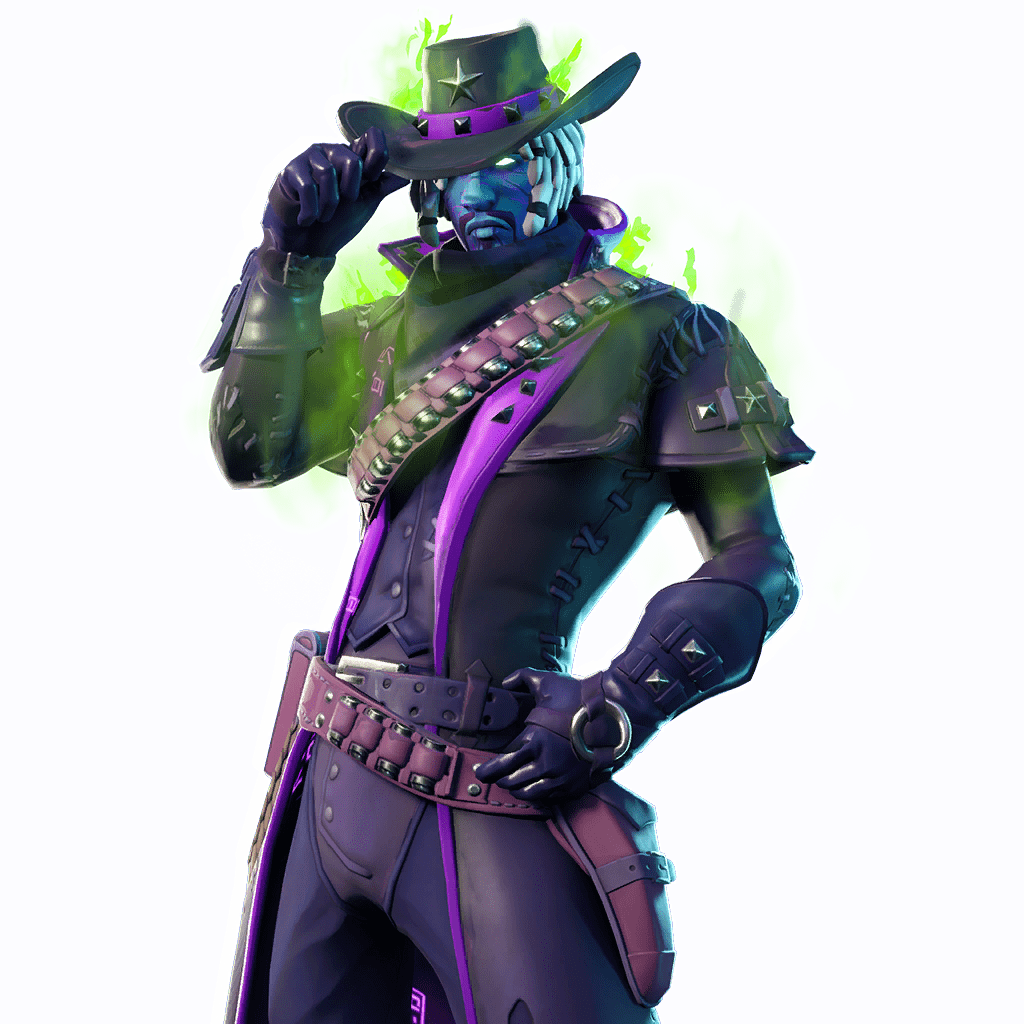 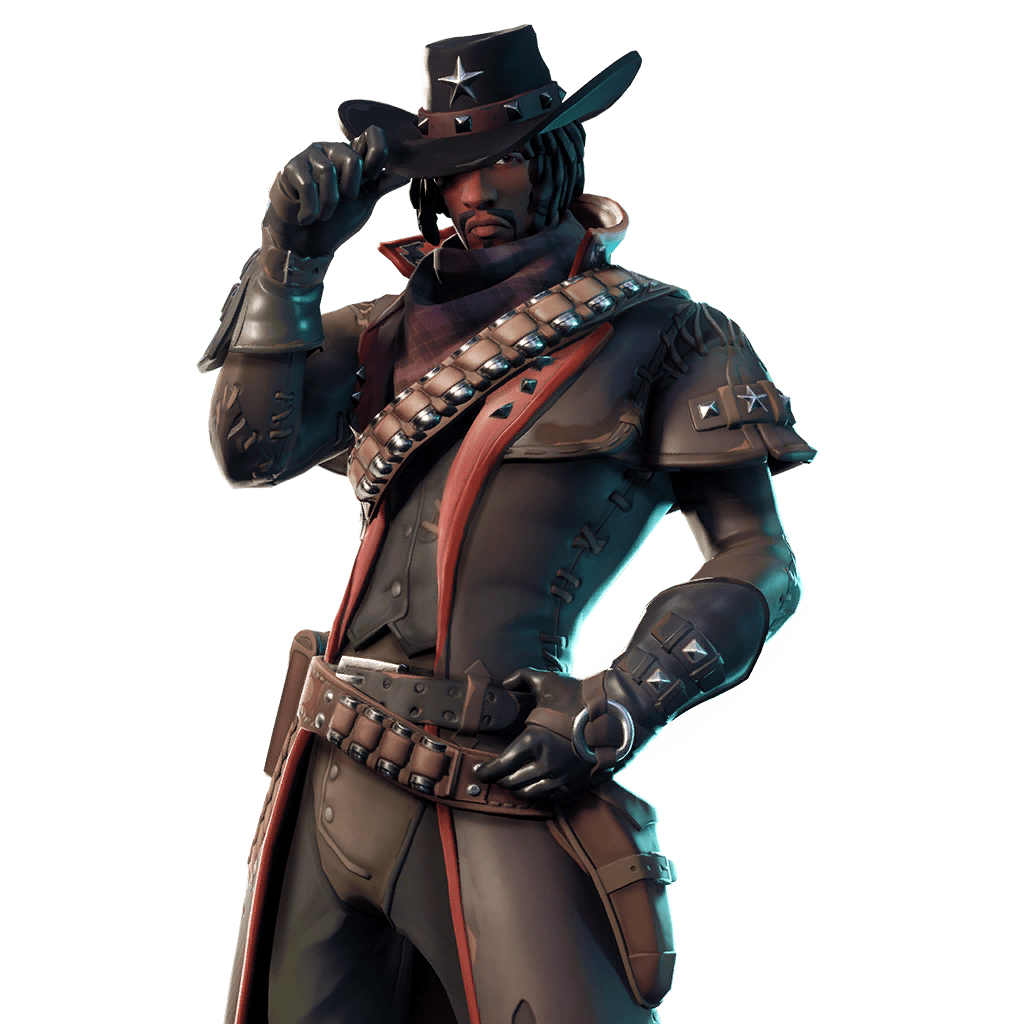 Deadfire is the name of one of the legendary avatar skins that are only available for the Battle Royale version of the game Fortnite. Skins are items that change the appearance of the player or objects inside the game but do not have any added function or benefit except for aesthetical.

The Deadfire features an undead ghostly cowboy with blue skin and glowing green eyes. The avatar skin initially features a brown cowboy suit, but will later feature a dark green cowboy coat with purple details and decals, with brownish bandolier and belt after slaying a number of enemies on a match. This outfit also features a green and purple cowboy hat and emits an eerie greenish flame aura all over the body. As part of the outfit, a bonus back bling called Shackled Stone hangs on its back. This is a reactive outfit that activates after killing a certain number of players during a match. Once activated the green spectral flames will begin to show on the player’s skin.

This legendary avatar skin is a part of the cowboy-themed set called Western Wilds. Obtaining this outfit also features a bonus back bling called Shackled Stone.

This outfit can be obtained in the Cash Shop during its rotation. 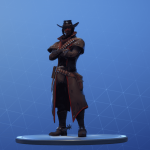 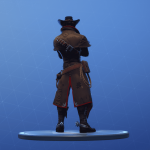 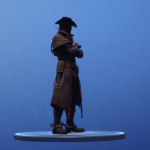 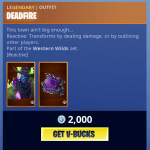 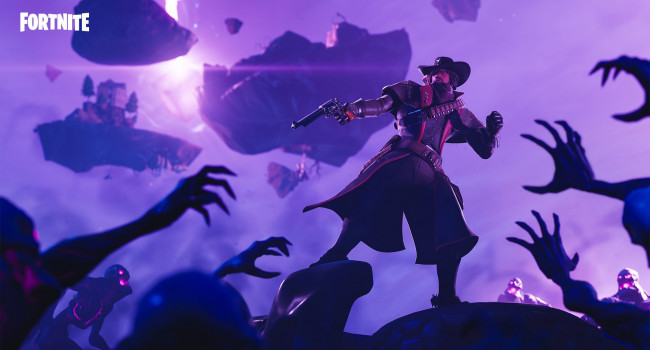 Deadfire high-quality PNG images with transparent background to use them as you wish (YouTube thumbnails, skin concept and so on). 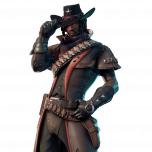 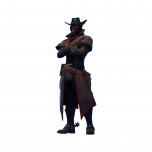 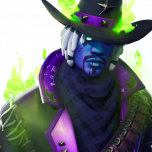 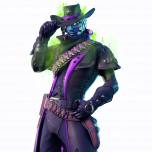 Deadfire rotation history in the Fortnite Shop. Below you can see the first and last time when Deadfire could be bought from Item Shop, also how many days it was seen and the dates list. This cosmetic item can be re-added in the future, so check the store regularly.

Every action has consequences.

The Drift is the name of one of the legendary male skin outfits for the game Fortnite Battle Royale. Outfits change the appearance of...

Havoc is the name of one of the outfits for the Fortnite Battle Royale game. Havoc is one of the most sought-after costumes of...

Insane skin that is definitely going to be as rare as Recon Expert, Ghoul trooper, and Renegade Raider. Was only available for Fortnitemares and is never going to be returning again. It even stated “Special Event”. Whoever owns it – count your lucky stars. You own a piece of history.

Rarity is kind of stupid. However, I understand the reasoning behind it, but I don’t have the desire to participate. As long as I have the skins I like, I’m happy.

This skin no longer is reactive, not sure if a bug or what has caused it to stop working.

I own it but i honestly don’t think it’s that rare. does anyone know a place where I can check skins rarity

This [email protected] shot is awsome