Glimmer is the name of one of the Winter-themed legendary female outfits for the Battle Royale mode of the game Fortnite. The Glimmer outfit is also called the “Elsa skin” by the community -referring to the Disney Princess character named Elsa of the film Frozen.

The Glimmer legendary female outfit will turn your character into an elegantly dressed snow queen. The outfit features a blue battle dress paired with tights. It also has a necklace and fur-like accent on one shoulder. Glimmer also has an armband, waistband of bullets, and a cool frozen battle crown. This outfit seems to be inspired by the Disney Princess named Elsa.

The Glimmer outfit is a part of the Winter Wonderland Set. The set also includes a Crystal Carriage, Flurry and Glimmering Cloak.

There is 4 cosmetics item in the Winter Wonderland set, check the list below to see which items are included.

The Flurry is a rare harvesting tool skin available to the players of the third-person shooting Battle Royale video...

Crystal Carriage is the name of one of the rare glider skins for the Battle Royale mode of the...

The Glimmering Cloak is the name of one of the legendary back bling cosmetic items for the game Fortnite...

Glimmer is the name of one of the Winter-themed legendary female outfits for the Battle Royale mode of the...

The Glimmer legendary outfit can be purchased in the Cash Shop during its rotation. Glimmer high-quality PNG images with transparent background to use them as you wish (YouTube thumbnails, skin concept and so on). 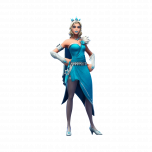 Glimmer rotation history in the Fortnite Shop. Below you can see the first and last time when Glimmer could be bought from Item Shop, also how many days it was seen and the dates list. This cosmetic item can be re-added in the future, so check the store regularly.

All that glitters is yours.

Love Ranger is a Fortnite: Battle Royale outfit that is a part of the Royale Hearts Set. The Love Ranger outfit resembles a statue...

Weave a web of destruction.

The Ice Queen is the name of one of the legendary outfits available to the Battle Royale version of the game Fortnite. Outfits and...