Whipped up, and ready to serve.

The design of the Lil Whip outfit features the player character in an ice cream cone mascot suit. The pants have sprinkles on them, and the jacket is a waffle cone over which Lil Whip is written and can be viewed clearly. An avatar in the Lil Whip skin keeps a cool feeling while in the heat of the battlefield.

The Lil Whip is a part of the Two Scoops set. This outfit comes with a bonus back bling cosmetic item called Sno Cone.

There is 4 cosmetics item in the Two Scoops set, check the list below to see which items are included.

The Ice Pop is a cool-looking pickaxe skin that is available for the Battle Royale version of Fortnite. This...

Sno Cone is a back bling that looks like a toy holding a blue ice cream cone. This back...

The Lil Whip skin looks like a smiling ice cream cone mascot wearing a red jacket. The design of...

This outfit can be purchased normally in the Item Shop during one of its random rotations. Lil Whip high-quality PNG images with transparent background to use them as you wish (YouTube thumbnails, skin concept and so on). 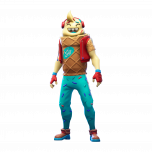 Lil Whip rotation history in the Fortnite Shop. Below you can see the first and last time when Lil Whip could be bought from Item Shop, also how many days it was seen and the dates list. This cosmetic item can be re-added in the future, so check the store regularly.

The Sparkle Specialist is the name of one of the female Battle Pass outfits for season 2 of the game Fortnite: BR. The Sparkle...

Catch the air and kiss the sky.