The Midnight Ops is one of the male-only outfits for the game Fortnite Battle Royale. This rare outfit is a part of the Stealth Syndicate Set.

The Midnight Ops outfit features a jet-black suit with a red scarf, and red decals all-over. The avatar also features a stylish mohawk-like hairstyle and some macho beard and mustache to complete the look.

Midnight Ops is a part of the Stealth Syndicate Set. A female version of the Midnight Ops outfit is also available and it is called Shadow Ops.

The outfit can be bought in the Cash Shop during its rotation. Midnight Ops high-quality PNG images with transparent background to use them as you wish (YouTube thumbnails, skin concept and so on). 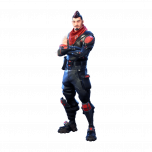 Midnight Ops rotation history in the Fortnite Shop. Below you can see the first and last time when Midnight Ops could be bought from Item Shop, also how many days it was seen and the dates list. This cosmetic item can be re-added in the future, so check the store regularly.

He’s ready to party ’til midnight.

A legend in the making.

Charting the dark fringes of the universe.

This app is so

This was in the item shop a day ago got removed af...