The Mogul Master (KOR) is the Korean Version of the epic Fortnite Battle Royale Outfit and is the female version of Alpine Ace (KOR). Released to commemorate the South Korea 2018 Winter Olympics, this outfit is created to represent South Korea and is the first of the eight outfit variations.

Mogul Master (KOR) is a part of the Winter Ski Set and is one of the eight variations of the Mogul Master. Mogul Master (KOR) high-quality PNG images with transparent background to use them as you wish (YouTube thumbnails, skin concept and so on). 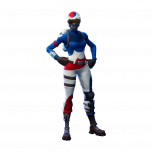 Mogul Master (KOR) rotation history in the Fortnite Shop. Below you can see the first and last time when Mogul Master (KOR) could be bought from Item Shop, also how many days it was seen and the dates list. This cosmetic item can be re-added in the future, so check the store regularly.

The TomatoHead is the name of one of the epic outfits for the game Fortnite Battle Royale. Outfits change the appearance of the player,...

Slurp up and ship out. Reactive: Head transforms with higher shields