The Renegade Raider Troop is the name of one of the female Battle Pass outfits for the game Fortnite: BR.

The Renegade Raider is a female-only Battle Pass outfit that features a reddish-brown tank-top with dark brown pants and gloves. The outfit also comes with a leather cap helmet with built-in goggles.

The Renegade Raider outfit is part of the Storm Scavenger set.

This outfit can be purchased from the Season Store and requires Level 20 in Season 1. Although the outfit can be unlocked once the player reaches level 20 in the first season, it won’t be available until it is bought using V-Bucks. The item can also only be purchased during Season 1 of the game. Renegade Raider high-quality PNG images with transparent background to use them as you wish (YouTube thumbnails, skin concept and so on). 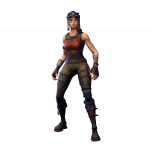 Are you real, or just a reflection?

Journey beyond the edge of the sky.

The Aerial Threat is the name of one of the rare male outfits for the game Fortnite Battle Royale. This skin is designed to...

She is a part of a set with the axe, i own both so please correct the information above, thanks 🙂

Overpriced, red, and smelly. I want a double cheeseburger with extra diaper please.

this is one of my fav skins in this game.i played at the time when this skin was out buy I didn’t have any money to buy it.So one day ill find an account with this skin on if for maybe 200 or more.

this skin is part of the storm scavenger set. other skins in this set include the rusty rider, rust bucket, and rust lord.