King of the scrap heap.

Requires the player to reach Tier 23 in Season 3 Battle Pass.

The Rust Lord is the name of one of the Epic male Battle Pass outfits for season 3 of the game Fortnite: BR and is one of the most popular outfit of the game.

The Rust Lord outfit is a popular outfit that features a greenish dark pants and rustic maroon jacket with a blue scarf. What makes this outfit popular is its cool-looking closed helmet.

The outfit is a part of the Storm Scavenger Set that features only two items; the other one being the Rare Pickaxe called SawTooth.

This epic outfit can be unlocked at Tier 23 of the paid Season 3 Battle Pass. Rust Lord high-quality PNG images with transparent background to use them as you wish (YouTube thumbnails, skin concept and so on). 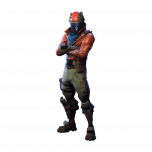 The Redline is the name of the epic female skin outfit for the game Fortnite Battle Royale. Skins change the appearance of the player,...

Would like to see this one come back in a future item shop.