You didn't see a thing.

Shadow Ops is a part of the Stealth Syndicate Set. A male version of the Shadow Ops outfit is also available and it is called Midnight Ops.

The Shadow Ops can be obtained through the Cash Shop during its rotation. 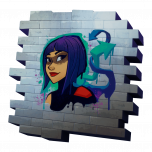 Shadow Ops rotation history in the Fortnite Shop. Below you can see the first and last time when Shadow Ops could be bought from Item Shop, also how many days it was seen and the dates list. This cosmetic item can be re-added in the future, so check the store regularly.

Pitiless. Remorseless. It will not stop. Ever.

Protector of the Island’s ancient temples.

Zoey is the name of one of the female outfits for the game Fortnite Battle Royale. This costume is exclusive for those with the...

LET ME TALK TO YOUR MANAGER

Did the shop rotation history meant that she would not be available since June 12th or does it mean that that was the last time she seen in the shop, plz lmk I’m hoping she comes back ASAP