The Skull Ranger features a soldier dress in a skeleton costume. The costume also comes with painted skin with a skull face paint. The Skull Ranger outfit also features unlockable designs that alter the color of the skeleton bones. This outfit was designed for the Halloween holidays. 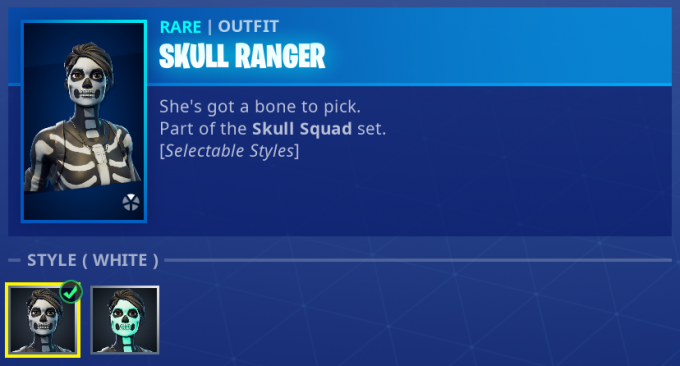 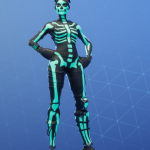 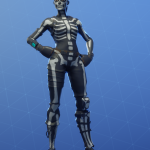 This rare costume is a part of the Skull Squad Set that is meant for the Halloween season of the game. 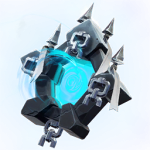 This outfit can be purchased in the Cash Shop during its rotation. This outfit is likely only available in rotation during the Halloween seasons. 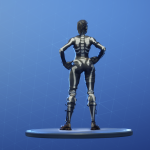 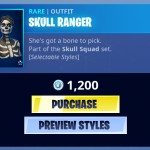 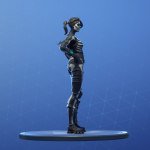 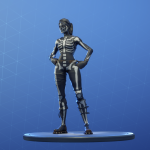 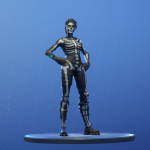 Skull Ranger high-quality PNG images with transparent background to use them as you wish (YouTube thumbnails, skin concept and so on).

Skull Ranger rotation history in the Fortnite Shop. Below you can see the first and last time when Skull Ranger could be bought from Item Shop, also how many days it was seen and the dates list. This cosmetic item can be re-added in the future, so check the store regularly. 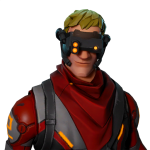 The Brilliant Strike is the name of one of the male outfits for the game Fortnite Battle Royale. The Radiant Striker is a male...

Marino is a cool, strong male avatar in an army look. This skin comes in the Beach Battalion set with some other awesome accompaniments.... 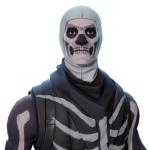 Skull Trooper is one of the epic outfits for the game Fortnite: Battle Royale. The outfit was introduced as part of the Fortnitemares Update. This...

Looks great but it was only out for 14 hours, which is sad but I am getting the Skull trooper instead. But remember Skull Trooper isn’t rare anymore so rip.

Omg this is so good 😊

I bought it because i thought you would get the Back bling challange, but is only for skull tropper. 🙁

Look at them tiddies

it came back out

Why don’t you put the number of times it’s been in the shop? It’s been there for like three days and yet you seem to have taken that feature out of your site. Disappointing enough to make me use another site for rotation numbers

Please can we have it back it is a loggers skin

Its rare in February

Does anyone know when this skin will come back out?

i really need a new skin