Skull Trooper is one of the epic outfits for the game Fortnite: Battle Royale. The outfit was introduced as part of the Fortnitemares Update. This outfit is the male version of the outfit called Skull Ranger.

The Skull Trooper outfit features a black military suite costume with a white skeleton painted all over it. The outfit is made complete with a skeleton face makeup.

This skin has 3 selectable styles that can be used in-game, check below. Everyone who had the original Skull Trooper received the purple variant. This one is not unlockable for other players.

The costume is part of the Skull Squad Set.

Skull Trooper is one of the epic outfits for the game Fortnite: Battle Royale. The outfit was introduced as...

The outfit can be bought in the cash shop for 1.200 V-Bucks despite it having an “Epic” Rarity. The outfit is a weekly item for the week of Halloween. 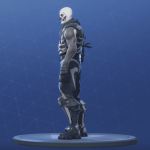 This skin has 3 selectable styles that can be unlocked in-game, check below. 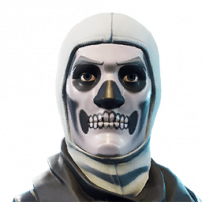 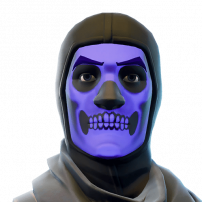 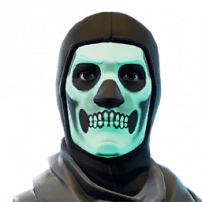 Skull Trooper high-quality PNG images with transparent background to use them as you wish (YouTube thumbnails, skin concept and so on). 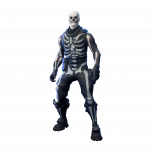 Skull Trooper rotation history in the Fortnite Shop. Below you can see the first and last time when Skull Trooper could be bought from Item Shop, also how many days it was seen and the dates list. This cosmetic item can be re-added in the future, so check the store regularly.

Boldness is my nickname.

She was just a girl from LA, but destiny had big plans for her.

The Maverick is the name of one of the epic male skin outfits for the game Fortnite Battle Royale. Outfits change the appearance of...

I’m not sure where you’re getting your informa...

Pls get it in the store i need it pls. Iam going to be so happy if you do that pls

Maybe will be added this year when Halloween event starts, like last year.

NO… I have this skin and THEY NEED to keep it OG. Its an amazing skin and it proves you are a full time player, since season 1. If they add this into the next Halloween it will ruin its lifetime of “epicness.”

lol that one patch had to be covered

I love. this skin but missed. out as I was not. playing fornite. when it came out please. let me know when its coming back in the shop. ?

plz give the skin my account is pumpkin king136

Corny kids like this one just because they saw it in someone’s YouTube video. They also put wings on their outfits ’cause they saw it on someone. Makes me sick. Havoc the sexiest, then this new guy Abstract or somethin’, I like his shoes and pants. The coolest/freakiest one for me is the fish-headed one and afro guy. This one just Jonesy having fun for Halloween, Rabbit Raider Jonesy much better.