As sugary sweet as winter berries.

Sugarplum is a winter-themed epic outfit that was released back in December 2018 for the game Fortnite Battle Royale. This outfit comes with a bonus back bling item called Flutterfrost.

Sugarplum features an elf-like female avatar with long ears and blue skin wearing some cool Christmas-themed sweater and a blue knit cap. The female avatar has a fiery orange hair and is wearing a pair of big and thick geeky eyeglasses. Her red outfit is also similar to some clothes worn by Santa’s elves. It is rumored that Sugarplum is a fairy representing winter berries.

The skin is bundled with the Flutterfrost back bling cosmetic item. But, at the moment, it is not a part of any set.

The outfit can be purchased in the Cash Shop during its rotation. It first appeared in the Shop during the last days of the year 2018. Sugarplum high-quality PNG images with transparent background to use them as you wish (YouTube thumbnails, skin concept and so on). 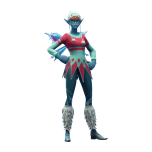 Sugarplum rotation history in the Fortnite Shop. Below you can see the first and last time when Sugarplum could be bought from Item Shop, also how many days it was seen and the dates list. This cosmetic item can be re-added in the future, so check the store regularly.

The Fyra is one of the female epic skins available exclusively to the Battle Royale version of the game Fortnite. Using this skin does...

Yee-Haw is the name of one of the epic avatar skins available for the Battle Royale version of the third-person shooting game Fortnite. This...

Armed with power of the dragon.