Yee-Haw is the name of one of the epic avatar skins available for the Battle Royale version of the third-person shooting game Fortnite. This wacky skin does not have any other effect or have any function except alters the appearance of the player’s avatar.

The Yee-Haw! Features a female avatar with a default soldier skin, while wearing a llama mount costume. The llama mount features a yellow horn, a sky-blue skin, and some rainbow decals. The costume also features a pair of fake legs so the avatar would look like she’s riding the mount, rather than wearing it. This wacky costume looks funny on the battlefield.

This epic costume is not a part of any set. Yee-Haw! high-quality PNG images with transparent background to use them as you wish (YouTube thumbnails, skin concept and so on). 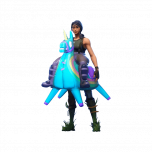 Yee-Haw! rotation history in the Fortnite Shop. Below you can see the first and last time when Yee-Haw! could be bought from Item Shop, also how many days it was seen and the dates list. This cosmetic item can be re-added in the future, so check the store regularly.

Undermine the order from the shadows.

The Blitz is the name of one of the female football-themed avatar skins available only for the Battle Royale version of the third-person shooting...