Ready for a ballroom blitz.

Disco Brawl is the name of one of the skins for the Pickaxe tool for the game Fortnite Battle Royale.

The Disco Brawl is a combination of your standard pickaxe and a shiny disco ball. This pickaxe skin works really well with some outfits with a similar theme. We recommend you to use this pickaxe with Funk Ops outfit.

The pickaxe is part of the Fortnite Fever Set.

There is 5 cosmetics item in the Fortnite Fever set, check the list below to see which items are included.

The Disco Fever is an amusing emote that comes with the Fortnite. Needed to do a quick disco dance...

Disco Brawl is the name of one of the skins for the Pickaxe tool for the game Fortnite Battle...

The Sparkle Specialist is the name of one of the female Battle Pass outfits for season 2 of the...

Get Down is a Fortnite glider inspired by the dance floor. Do you care for a bogey? The Get...

The Disco Brawl skin can be bought in the Cash Shop. Disco Brawl high-quality PNG images with transparent background to use them as you wish (YouTube thumbnails, skin concept and so on). 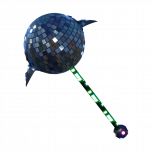 Disco Brawl rotation history in the Fortnite Shop. Below you can see the first and last time when Disco Brawl could be bought from Item Shop, also how many days it was seen and the dates list. This cosmetic item can be re-added in the future, so check the store regularly.

EVA is the name of one of the epic harvesting tool skins for the game Fortnite Battle Royale. The EVA, short for ExtraVehicular Axe,...

The Candy Axe is a festive skin for the Pickaxe tool for the game Fortnite Battle Royale. The Candy Axe will turn your pickaxe...

The AC/DC (or ACDC) is the name of one of the pickaxe skins for the game Fornite: BR. This pickaxe skin is exclusive for...

Mauler is a unique harvesting tool that comes with the epic Beastmode outfit and the rare Fuel glider. It is a pickaxe that comes...

You really need to make a way to earn these bucks for the kids playing ….having to buy all this stuff is expensive and when parents can’t afford these things u have every day for a limited time makes kids upset …if they can earn the bucks they can learn to save them and buy it with what they earned