Heralds Wand is a cool-looking pickaxe skin that is available for the Battle Royale version of Fortnite. This rare pickaxe skin was first released on October 2018, along with the Grim Medicine set.

The Herald’s Pickaxe is a black rod that features a silver caduceus traditional symbol for medicine. The wand also features an hourglass in the center of the two wings, and inside the hourglass is what seems to be a green chemical.

The Herald’s Pickaxe rare harvesting tool skin is a part of the Grim Medicine set that features a plague doctor theme. 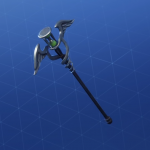 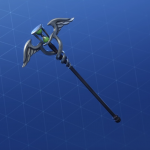 Herald’s Wand high-quality PNG images with transparent background to use them as you wish (YouTube thumbnails, skin concept and so on).

Herald’s Wand rotation history in the Fortnite Shop. Below you can see the first and last time when Herald’s Wand could be bought from Item Shop, also how many days it was seen and the dates list. This cosmetic item can be re-added in the future, so check the store regularly.

The Harpoon Axe is the name of one of the rare pickaxe skins for the game Fortnite Battle Royale. Pickaxe Skins are cosmetic items...

Cliffhanger is the name of one of the rare pickaxe skins for the game Fortnite Battle Royale. The Cliffhanger is a skin that resembles... The Vuvuzela is a rare pickaxe skin for the game Fortnite Battle Royale. Harvesting tool skins do not provide any added function or benefit... Slam Dunk is the name of one of the rare pickaxe skins for the game Fortnite Battle Royale. Slam Dunk harvesting tool skin will...

Uh, no? It’s from the shop, not the battle pass.

its not from the battle pass you deafualt