Hack your way to victory.

Requires the player to reach Tier 7 in Season 3 Battle Pass.

Sawtooth is the name of one of the rare harvesting tool skins for the game Fortnite Battle Royale.

The Sawtooth is a deadly looking pickaxe that seems to combine two kinds of pickaxes into one. This pickaxe skin modifies the way the default pickaxe looks but does not provide any functionality or boost in efficiency and performance.

The Sawtooth is a part of the Storm Scavenger Set.

To acquire this pickaxe skin, you must purchase the Season 3 Paid Battle Pass, and reach Tier level 7 to unlock this rare skin. 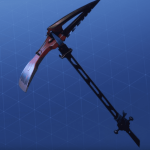 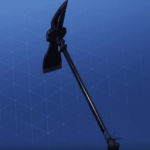 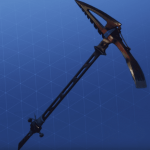 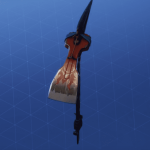 Sawtooth high-quality PNG images with transparent background to use them as you wish (YouTube thumbnails, skin concept and so on). 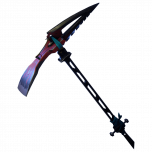 The Empire Axe is a popular pickaxe skin for the game Fortnite Battle Royale. The Empire Axe turns the player’s pickaxe harvesting tool into...

Prickly Axe is a harvesting tool that looks like a prickly plant. This pickaxe will perfectly match the Prickly Patroller skin. This pickaxe looks...

The A.X.E. is a rare pickaxe skin available for the Battle Royale version of the game called Fortnite. This axe skin does not alter...