Won a game of Battle Royale during Season 2.

Snowflake is literally the coolest of all umbrellas in Fortnite.

With white snowflakes and a frosty, blue base there is no doubt the Snowflake Umbrella is suited for low temperatures. That might be handy when you’re chased by a mighty storm.

Unfortunately, the Snowflake Umbrella is not available any longer. It was given as a reward to players who won a game of Battle Royale during Season 2. Most likely there it won’t be available in the future. If you don’t have this one already, you’ve got to work on your jealousy towards those who do. Snowflake high-quality PNG images with transparent background to use them as you wish (YouTube thumbnails, skin concept and so on). 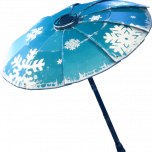